For the past 6 months I have been working on a beastly 15,000 line .NET application. Spaghetti code with tons of redundancy (Copy&Paste gone wild). I have cleaned up all the existing code and added over a hundred new pieces of functionality (ranging from the cosmetic to major surgery). During this time I have kept some statistics to do with the size and nature of the application.

Despite the addition of all the new functionality just by removing the redundancy I have reduced the total number of semicolons in the application (my rather daft rule-of-thumb for size of the code) from nearly 15,000 to just a shade over 10,000. That’s despite adding nearly three hundred unit tests, extensive logging and the new functionality.

Graph of Program Statistics Over Time 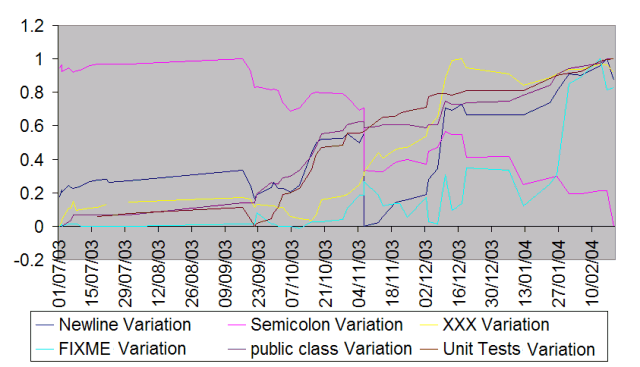 It is interesting (to me anyway) to note the near-constant decline of semicolons while newlines have risen from a mid-project low to be at their highest at the end.

Is this evidence for Paul Graham’s assertion that Succinctness is Power? I’m not sure I can count my changes as succinctness as they have added quite a lot of newlines and over a hundred new classes.

One Reply to “Anatomy of a Rewrite”